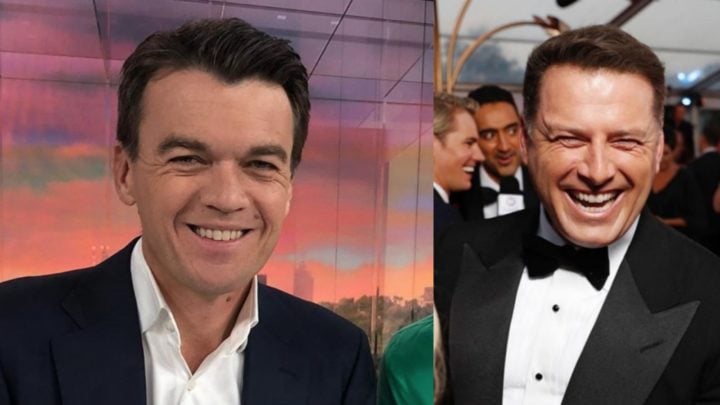 They were once fierce daytime TV rivals and while Karl Stefanovic has been gone from the Today show since the end of last year, his ABC competitor Michael Rowland has ensured their friendly banter continues.

The ABC Breakfast host, 51, took a hilarious swipe at Channel 9 star Karl, 45, on Twitter this week, making a direct reference to the notorious Uber-gate scandal. In March last year, an Uber taxi driver secretly listened in to a private conversation between Karl and his brother Peter, as the star reportedly slammed his former co-host Georgie Gardner and accused her of “sitting on the fence” and not having enough opinions. The driver later sold his story to a magazine.

Karl and Georgie have both since laughed the whole thing off and it has become a running joke among Karl’s fellow TV stars and rivals ever since. But refusing to let him off the hook just yet, Rowland brought it up once again in a brutal tweet.

We're previewing the new @ABCTV series 'Diary of an Uber Driver' with @mrsamcotton. Love to hear your best or worst experience in an Uber or Taxi. @BreakfastNews (we've got yours already, @karlstefanovic, thanks anyway). pic.twitter.com/V7Jm52t9r8

He began the post by promoting a new series called Diary of An Uber Driver, asking viewers to send their worst stories, writing: “We’re previewing the new @ABCTV series ‘Diary of an Uber Driver’ with @mrsamcotton. Love to hear your best or worst experience in an Uber or Taxi. @BreakfastNews.”

He then directed the post directly to Karl, adding: “(We’ve got yours already, @karlstefanovic, thanks anyway).” While Karl is yet to respond to the post, Rowland’s followers loved the friendly jibe with one commenting: “Haha savage burn Rowland!”

It comes after Georgie lifted the lid on how she copes with nasty comments from either her fellow stars or viewers, in an exclusive chat with Starts at 60. When asked how she feels about Uber-gate now, she said: “It’s done now, enough said.”

And asked if she lets rude or mean comments like Karl’s get to her, Georgie added: “No, I don’t let it get to me. I figure I can only be true to myself. I completely understand in a job like that that it’s not going to appeal to everyone, but I stand by what I do, wear, and try not to be too phased by it and just focus on the job.”

Karl and Georgie were known for their differing opinions and views when starring together on the show last year. But while many may think the rivalry was put on, Georgie insisted it’s all real on her part.

“Do you know I could be accused of a lot of things, but there’s one thing I’m not – I’m not fake,” she insisted. “What you see on camera is totally authentic, certainly on my part, and I’ll leave it to the audience to judge if that’s good, bad or indifferent.”

Karl previously admitted there are still tensions between the pair following his insults, and he previously told Hughsey and Kate on their radio show: “I thought she was going to hit me,” before adding: “It could have been a lot worse.”

The pair didn’t escape scot-free inside the Logies ceremony last year either, as Hughsey took aim at Karl over his comments in his hilarious speech, saying at the time: “Karl it’s okay, you shouldn’t have been bitching about your work colleagues, I’m sure Georgie’s very happy with it… Still on the fence Georgie or did you take a pail off and hit him in the head with it? Can you imagine Karl and his brother in the bunk beds at home as kids just talking smack about Mum? She’s outside the door going, ‘I can hear you d***heads.”

Do you miss Karl starring on the Today show? Are you a fan of Michael Rowland?