‘My mother ran off with another woman’: Jennifer Byrne’s painful family scandal 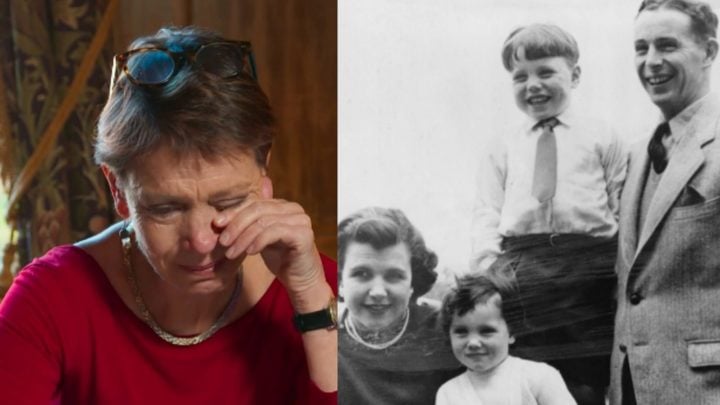 Jennifer Byrne broke down in tears on the show. Source: SBS/Who Do You Think You Are?

She’s known for her high profile presenting roles on everything from 60 Minutes to The Book Club, but Aussie journalist Jennifer Byrne hit the spotlight years before her own high-profile career took off – all thanks to her parents’ painful split.

The TV star and journalist, 64, is the granddaughter of Victoria’s longest serving governor Sir Dallas Brooks, meaning she was born into a life of privilege and spent many of her younger years in Government House. Unfortunately, it also meant that her family’s private business played out in the public eye too.

She has now appeared on SBS program Who Do You Think You Are? – set to air on Tuesday – where she opens up on her parents’ highly publicised split, as well as journeying back hundreds of years to discover her ancestors’ incredible royal connections.

Jennifer, who is the wife of famed Aussie TV journalist Andrew Denton, begins the program by remembering the end of her parents Robin Byrne and Jeanette Brooks’ marriage – revealing the whole family was thrown into turmoil when Jeanette left Robin for another woman.

“In short, my mother ran off with another woman”, Jennifer explains on the show. “I was 10 or 11 when the scandal broke, and that’s horrible because everyone knows and everyone’s talking about you and it’s all over the papers.

“I was traumatised by the divorce and the scandal, it was just a really unhappy time.”

In retaliation, she adopted her father’s motto: “Never, ever, ever look back”, however since they’ve both passed away, she’s decided to change her point of view – inspiring her decision to go on the show and trace her family tree back.

The TV show’s film crew follow her as she visits England to discover a series of royal connections – before ultimately finding out that her 12 times great-grandfather was Sir Edward Neville, a courtier in King Henry VIII’s court.

She then follows her mother’s bloodline back even further and incredibly discovers that her 15 times great-grandmother was the granddaughter of King Edward III – officially making her a royal.

As she’s shown the full family tree, Jennifer becomes visibly emotional and has to fight back tears as she sees her entire history laid out.

However, it’s only half the story, as she then traces her father’s own family tree back – uncovering photos she’d never seen before.

His own father – Jennifer’s grandad – died when he was nine years old, something she admits her dad rarely spoke about because it was “too painful”. Seeing photos of her father at their summer house later, visibly happy, brings Jennifer to tears as she recalls him talking about it as a “golden place”.

“But then when his father died he didn’t want to talk about anything much,” she adds.

Along the way, she finds out a series of shocking scandals on both sides of the family including beheadings, prisoners, war and more.

Ultimately, she says: “I look at my maternal scandal, which has made me so unhappy over the years, and look – there’s scandals everywhere in our family. We’re just another one, get over it!”

She adds: “I’ve really enjoyed learning about all the scandals in the family. As someone who, as a child, felt the ill wind of scandal, I would like to reach back to that child I was and say, ‘It’s nothing Jen, it’s nothing’.”

Jennifer Byrne will appear on Who Do You Think You Are? on Tuesday, May 7 at 7.30pm on SBS.

Do you have any past family scandals you know about?