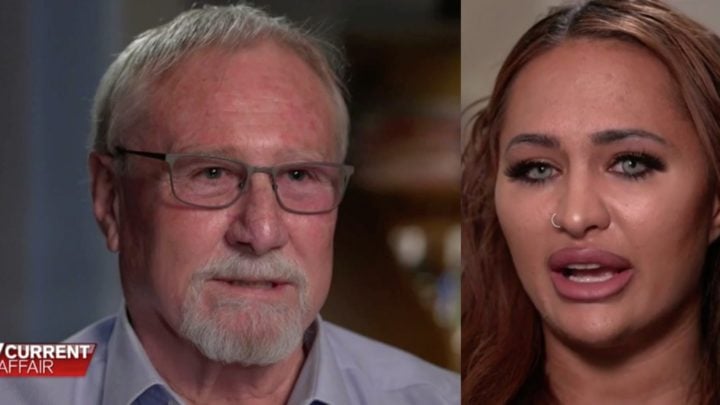 Kevin had to pay up his savings to get his granddaughter Tori out. Source: Channel 9/A Current Affair.

A grandfather has revealed he was forced to hand over all of his retirement savings to rescue his granddaughter from a Bali jail, after she was locked up for carrying prescription medication through the airport.

Appearing on Channel Nine’s A Current Affair, distraught grandad Kevin claimed he was conned into handing over US$25,000 (AU$37,000) to a law firm after they promised they could get his 25-year-old granddaughter out of jail with the cash. However, it meant he lost all of his hard-earned cash in the process.

Breaking down in tears, his granddaughter Tori Hunter revealed on camera that the meds she was carrying were to treat her anxiety and ADHD, including dexamphetamine and valium, before describing how authorities “strip searched” her – despite her declaring the meds at Denpasar Airport.

“It’s not as if I’m Schapelle Corby or anything, it was prescription medication. They treated me like a dog,” Tori told the show. “I wanted to let my hair down but instead I got locked up.”

TONIGHT. #9ACA.
How a girl's trip to Bali cost these grandparents their retirement nest egg… pic.twitter.com/qnbRt49o8y

While Tori was also carrying a note from her doctor explaining what they were, the show explained she was carrying more of the pills than she needed for her six-day holiday there.

After hearing of his granddaughter’s hell, Kevin phoned the Australian Consulate, which recommended a series of lawyers the family could contact. He claimed after calling one of them, they promised Tori would be released if he handed over the huge sum in “legal fees”.

“He told me that Tori was looking at five years jail and she would be released if I sent the sum the next day,” Kevin said. “I was instructed not to go to the media and keep it to myself.”

Sure enough, four days after being detained, Tori was freed. She flew home to Adelaide’s Clovelly Park last week. However, the emotional young Instagram model explained it had wiped out her grandad’s savings, with him adding that “it’s gone… it’s gone”. She’s now hoping to raise funds on GoFundMe to pay her grandparents back.

The story sparked a very mixed reaction on social media, with one viewer commenting on Twitter: “This is were you would think the Australian government would step in,” while another added: “Don’t go to Bali. They are so crooked. I’m staying right here, no matter how cheap it is.”

However, one insisted donations aren’t enough to pay her grandfather back, with one person commenting: “She needs to work to pay them back not donations from people… or handouts,” and another added: “Lovely Grandparents.”

The Department of Foreign Affairs told A Current Affair it will investigate any allegations of inappropriate conduct raised against the lawyers.

Did you know there were penalties like this for carrying prescription meds? Have you been conned out of money by a lawyer?