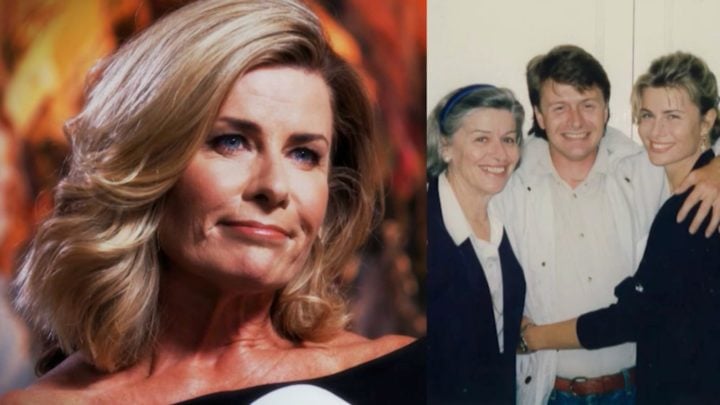 Deborah Hutton opened up on her brother Rod's death (right centre) and the impact it had on her mum. Source: ABC/Anh's Brush With Fame.

Deborah Hutton has opened up on how she coped with her grief after losing both of her brothers in the space of a year, admitting the time was “awful” in a tell-all TV interview.

The Aussie model and TV star appeared on ABC’s Anh’s Brush With Fame – with the episode set to air next Wednesday – to discuss the heartbreaking time, while also revealing why she never had children, her sadness over the breakdown of her 11-year relationship with celebrity agent Harry M. Miller and her battle with body image issues following a tough few years in the modelling industry.

Deborah’s brother Rod was just 46 when he passed away, years after suffering a brain injury when he was 27 in a train accident.

Asked how her father dealt with his injury at the time, Deborah admitted to Anh: “Yeah, just tough. When something like that happens you have no power, do you, as a parent?”

She added: “We had enormous grief and loss around losing him, but then the boy that we got back after his recuperation was a different Rod. But he was the most beautiful boy.”

While Deborah and her parents helped to care for Rod, he had to have carers to help him with everyday tasks.

“A side effect of his brain injury was epilepsy,” she explained. “And he had carers looking after him, but he had an epileptic fit and they didn’t hear when he fell out of bed and he passed away. It was just a shock, he was such a beautiful, beautiful man.

Tragically, just months afterwards, Deborah’s other brother David was diagnosed with liver cancer at the age of 50.

“It was in that year that we lost him and he had two beautiful boys – he’d only just had a baby, it was just, just awful.”

Admitting it was a terrible time for both David’s wife and her mum, Deborah added of her mother: “Losing two boys… She’s been through hell, absolute hell. Awful, awful, I miss them. I really miss them.”

Deborah grew up apart from both of her brothers after her parents split up when she was just a young child, However, while she lived with her mother and step-father in Papua New Guinea for many years, the siblings always remained close into adulthood.

Elsewhere on the show, the model and TV star opened up on why she never had children – choosing love with former partner and high profile agent Harry M. Miller over starting a family at the time.

Deborah revealed she met Harry in the late 1980s, while working in the US as a model. Despite there being a 28 year age gap between them, they fell for each other and started a romantic relationship around a year later.

“My mother struggled with it because they’re about the same age,” she admitted, before adding: “We just got along like a house on fire, so I think we started going out when he was in his 50s, and I don’t know… it wasn’t a gap to me, it was a meeting of the minds in a way. We just got on. He really did guide me and also allowed me to see something in myself that I couldn’t.”

They remained together for 11 years but never lived together – and Deborah admitted on the show that she was left heartbroken when it eventually ended. The couple never had children together, something that Deborah has previously expressed sadness about.

“It wasn’t a conscious decision, it’s what happens when you’re making plans,” she laughed. “I remember the time that Harry and I were together, I was in my mid-30s, that I really felt that pang to have children.

“And I was never one of those women who wanted to have children just because I needed to have children. I watched my mother become a single working mum and that is a seriously difficult job. I wouldn’t want to take that one either.”

She admitted that while she often sees families and misses what she may have had, she instead focuses on what she has got and what she can be grateful for – including the freedom she has had by not having kids.

Elsewhere in the tell-all chat, Deborah admitted she battled depression in her earlier modelling years after being told to shed weight for a campaign. Instead, she found herself eating more as she struggled with her depression – eventually losing it and embracing a healthier lifestyle on her return home from the States.

It led to her suffering body image issues throughout her life – something she combatted incredibly when she posed completely naked for Australian Women’s Weekly. While many praised her for the stunning photoshoot, she also received backlash from some who claimed it was too heavily edited.

Hitting back at the outrage on the show, Deborah insisted while her chest area was smoothed out, she requested her face remain largely unedited as she’s proud of all her fine lines and wrinkles and wanted to show them off.

Deborah Hutton’s episode of Anh’s Brush With Fame airs on ABC on Wednesday, June 5 at 8pm.

Are you a fan of Deborah Hutton? Have you gone through grief like her after losing family members? How did you cope with it at the time?