Cher surprises audience with powerful ‘I Got You Babe’ duet 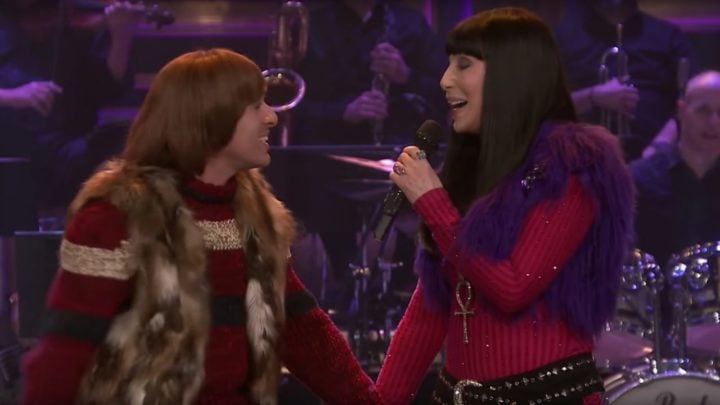 Decades after she first released the song with Sonny, Cher has returned to the stage with a powerful rendition of 'I Got You Babe'. Source: YouTube.com/The Tonight Show Starring Jimmy Fallon

It was one of the biggest hits of the 1960s and decades later, Sonny and Cher’s ‘I Got You Babe’ remains one of the world’s favourite duets.

A signature song for the famous duo, the song defined the early hippie movement and sold millions of copies around the world. While many Boomers remember the song as a timeless classic, it’s also a karaoke favourite for younger generations.

It’s also one of the big songs as part of The Cher Show – a new Broadway musical based on Cher’s early life and career. Earlier this week, Jarrod Spector and Micaela Diamond, who play the young Cher and Sonny Bono in the musical, appeared on The Tonight Show Starring Jimmy Fallon for a special performance of ‘I Got You Babe’.

The performance began with the young singers belting out the classic and looking remarkably like Cher and Sonny did in the ‘60s. While the pair did a fantastic job, the audience really went wild when the real-life Cher appeared on stage around halfway through the song.

The audience gave the singers a standing ovation, while viewers at home also praised the performance.

One fan on YouTube wrote: “Oh the memories that flood back. I wonder how that was for Cher – looking into ‘Sonny’s’ eyes like that. Just a great moment.”

Another person wrote: “WOW, Sonny and Cher got together in 1962 and Cher has not missed a beat. Time to get my butt to NYC to see The Cher Show!”

A third added: “When the real Cher walked out to sing with him I just about cried.”

Earlier this week, Cher opened up about the impact watching the new musical had on her life, admitting that it brought some of the most difficult memories back. Speaking on the US version of Today, the ‘Strong Enough’ singer said she’s regularly left “sobbing” during some scenes of the show.

The musical focuses on the musician’s rise to fame, including her turbulent relationship and subsequent marriage to her former husband as they launched a huge career together as a duo. Cher helped in the writing and production of the show and said the late Sonny would like it.

And, despite her continued success in her later years, Cher also claimed there were points where she thought her career was over.

“I have gone up so high and then fallen down so low. You just think, well, I would do something else but I don’t know how to do anything else.,” she explained.

.@cher’s back on tour and has a Broadway show all about her life. @jennabushhager caught up with her at the theatre where they’re staging @TheCherShow! pic.twitter.com/ZPyiGA8wbg

Read more: ‘I am sobbing, every time’: Cher’s pain over memories of late husband Sonny

What did you think of the performance? Have you ever seen Cher live in concert?