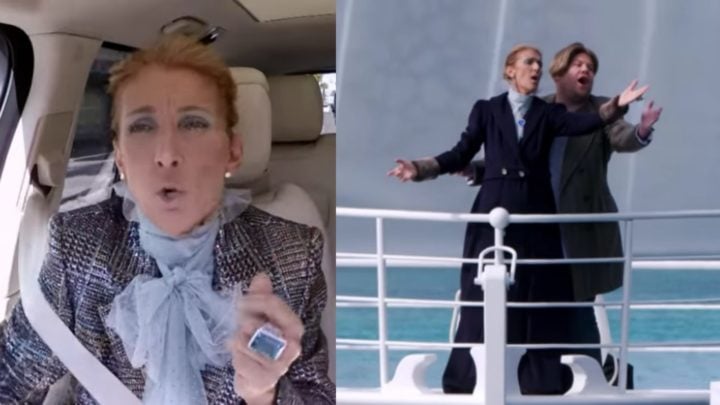 Celine Dion has sent fans into a frenzy with her powerful singing voice and vibrant personality in a jam-packed carpool karaoke segment on The Late Late Show with James Corden.

The 51-year-old showed off her talent and sense of humour as she jumped into the car with the TV host to sing a collection of her most loved songs including ‘It’s All Coming Back to Me’ and ‘I Drove All Night’.

Wearing a stunning black and white checked blazer over a pale blue shirt, which featured a statement pussy bow neck tie, and matching eyeshadow, the Canadian certainly didn’t disappoint, belting out her most famous tunes while enjoying some fun banter with Corden on the drive around Las Vegas.

From conversations about life in the spotlight to recreating the famous Titanic scene, the carpool session had it all.

Throughout the drive the host brought up Celine’s incredible fame and how being in the public eye has impacted her life. While it may seem like a dream for some, the ‘All By Myself’ singer claimed it hasn’t all been easy, especially after the birth of her first child.

Remembering the moment she welcomed her baby to the world Celine said: “One thing is that I’m delivering my first child and I don’t even have him in my arms yet and I look to my left and there’s a TV there and the doctor is announcing on television a beautiful baby boy… and I’m saying to myself, my baby is on television and I didn’t even hold him yet. So I turned off the TV.”

To finish off the exciting segment the pair went to the extreme as they swapped the car for a boat to recreate the iconic Titanic scene with Celine’s famous song ‘My Heart Will Go On’.

Standing at the front of the vessel Celine stood with her arms outstretched just as Rose had in the much-loved film while Corden stood behind her wearing a Leonardo DiCaprio wig.

With people watching on in amazement from the the shore the pair sang to their hearts content, belting out the famous tune with water fountains around them adding to a dramatic effect.

And, as the fashion icon she is, Celine’s love of shoes even managed to make its way into conversation as the host questioned just how many pairs the singer really owned. It was here the mother-of-three revealed her ingenious system to keep her massive collection of 10,000 shoes in order.

“In my house in Florida I had a system, it was computerised,” she explained to British star Corden. “I would press and doors open, and they were all by colours so I would press another button and they would turn in front of me. There was a whole system, I could press stop and get the shoes I want.”

Upon learning of the massive collection Corden then announced it was time for Celine to part with some of her beloved shoes with a plan to hand them out to unsuspecting people on the street. This was obviously a shock for the singer who wasn’t prepared to say goodbye to her prized possessions. After handing over just one pair to an excited person on the street a heartbroken Celine exclaimed: “I need alcohol.”

The karaoke session, which was published on the show’s YouTube page on Tuesday, received a flurry of attention from fans who had been waiting patiently for weeks for the segment to be released.

And they certainly weren’t disappointed with many claiming it’s the best carpool karaoke session they’ve seen. “This immediately became one of my most favorite [sic] carpool karaoke because of the ‘My Heart Will Go On’ bit,” one person commented.

“What a great sport that Celine is. It’s fabulous to see her getting back out there. I love her French-Canadian idiosyncrasies! What a fun duo that these two were,” another wrote. While a third said: “I had no idea this woman was so incredibly hilarious. Thanks, Celine and James!”

Are you a fan of Celine Dion? What did you think of the carpool karaoke session?