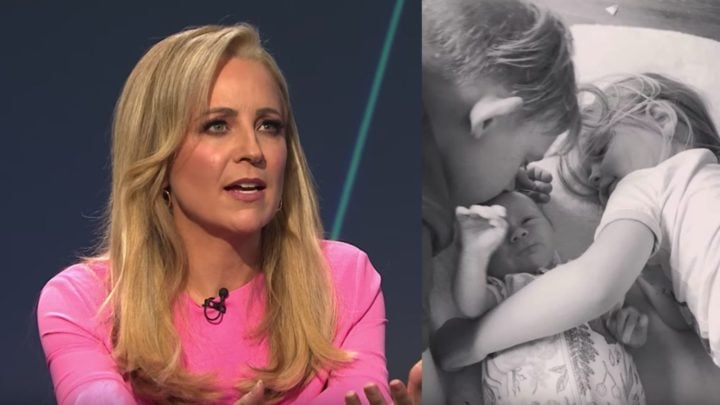 Carrie Bickmore opened up on her anxiety over giving birth on The Weekly. Source: YouTube/The Weekly.

She’s known for her open honesty about the difficulties of motherhood and now Carrie Bickmore has revealed she had to seek help from psychologists before the birth of her first daughter Evie – after almost dying following a particularly traumatic birth with her son Ollie.

In a deeply honest chat on ABC show The Weekly With Charlie Pickering on Wednesday, Carrie, 38, admitted she was left crippled with fear after giving birth to her son Oliver, 11, so much so she then feared welcoming her daughter Evie.

The star admitted she has previously suffered from anxiety due to the difficult birth, while her partner Chris Walker has OCD.

“We don’t spend a lot of time talking about it, I think,” she told the host on the program. “That’s what we have and we both openly see, I saw psychologists when I was pregnant with Evie as I had this real fear of giving birth to Evie because I nearly died after I gave birth to Ollie.”

She insisted that while both her and her partner have suffered with their own issues, they’ve accepted them and don’t feel the need to discuss it regularly.

“Both of those things are a part of our life. We don’t take special time to talk about as if it’s a strange thing or a thing to be ashamed of or anything, it’s who we are,” she added.

Carrie has since welcomed daughter Adelaide with her partner and has kept fans up to date every step of the way, with brutally honest social media posts and photos showing the good and the bad times.

She recently told The Australian Women’s Weekly that she wasn’t expecting it to be as hard as it has been.

“I think, arrogantly, I was like, ‘I’ve had two, it can’t be that hard to have another one’,” she told the magazine. “By then there’s already chaos, there’s already mess, so what’s adding another one? But it was pretty full on. And it certainly challenged me in ways I didn’t know were possible.”

At one point, Carrie admitted she started to consider if she could be suffering from postnatal depression as her daughter was struggling to settle while feeding and wasn’t sleeping much.

“I literally couldn’t put her down without her being uncomfortable. So I held her pretty much for six weeks straight, which meant I didn’t sleep,” she added. However, the TV star said she finally managed to overcome the dark days and said her daughter  is now super tactile and is always laughing and cuddling her.

Meanwhile, Carrie first revealed she’d seen a psychologist ahead of her first daughter Evie’s birth in 2017, telling her her Hit Network radio show at the time: “Giving birth is a full on thing, it’s beautiful, it’s special, but it’s also traumatic… It’s painful, I would have done anything to have the experience erased from my mind.”

She added: “They say you forget and that’s why you go back again. I never forgot. The funniest part, it’s hard to get your head around what actually happens… A big thing comes out of a very small place.”

Carrie suffered a severe haemorrhage 10 days after giving birth to her son Oliver, who she welcomed with her late husband Greg Lange, meaning she had to have an operation and blood transfusions to save her life.

Did you struggle after giving birth to a child?