‘A star in the making!’ Teen blows judges away with incredible Celine Dion hit 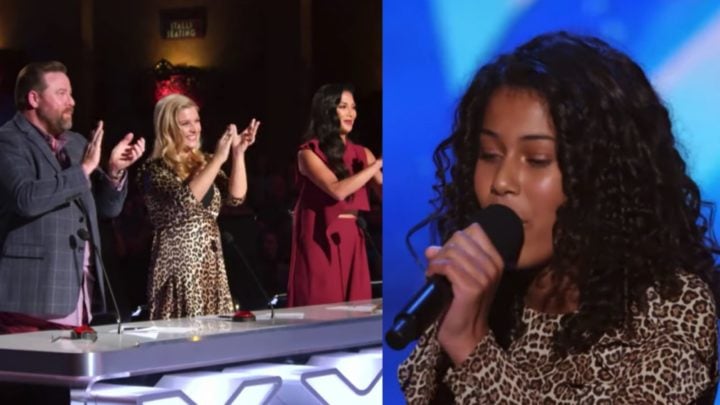 Jael Wena impressed judges and fans around the country with her incredible performance. Source: YouTube - Australia's Got Talent

Celion Dion has inspired millions of people around the world with her moving music and a 13-year-old contestant on Australia’s Got Talent could soon follow in her footsteps. Jael Wena appeared on a recent episode of the popular reality show and impressed judges Lucy Durack, Nicole Scherzinger, Shane Jacobson and Manu Feildel and fans around the country with her incredible performance, which earned her a standing ovation.

The young contestant, who came third in the Junior Eurovision Song Contest last year, wowed crowds with a moving rendition of the Canadian singer’s version of ‘Natural Woman’. The judges smiled with delight as the 13-year-old began singing the iconic track and showed off her impressive singing skills.

The entire audience gave Jael a standing ovation when the song was complete and Lucy was the first to judge the performance, telling the young contestant: “You came out here and you set the bar so high for yourself and you smashed it right out of the ballpark. That was absolutely astonishing good [sic].”

Shane jokingly added: You made me feel like a natural woman and that takes some work,” while Nicole also praised the young contestant, saying: “I can’t believe you’re only 13 and the voice that comes out of you. The tone already so rich and beautiful. So much control and I can tell you love singing and that’s what makes me really happy. I can see a lot of potential in your future.”

Viewers at home were also impressed with the performance and praised Jael online, with one writing: “Amazing for 13. I reckon she can push the envelope a bit more! She is a star in the making!”

Another added: “I think we will be seeing much more of this natural young woman in the not too distant future, whether she wins this or not! Beautiful sound. Well done.” While a third wrote: “The people on this show are so inspirational.”

It’s not the first time an Australia’s Got Talent audition has made headlines this week. On Sunday night, there wasn’t a dry eye in the house when the inspirational Hummingsong Choir stormed the stage to audition for the popular reality show.

Lead singer Anna Humberstone explained that the choir was created as a way for women to get together and sing, while also raising money for women and children escaping domestic violence. Meanwhile, another singer said she herself was a survivor of domestic violence and how hard it is for victims to speak up and tell people.

The group of more than 100 women aged between 19 and 83 then performed a haunting rendition of ‘Somewhere Only We Know’ by Keane. Nicole could be seen singing along from the audience as the inspiring women performed their hearts out on stage, while the other judges began crying as the song progressed. Even host Ricki-Lee Coulter watched on in awe from the side of the stage.

Nicole was the first to judge the performance, telling the choir: “When they say there’s power in numbers! That was so unbelievably powerful. It was quite spiritual for me.”

Lucy added: “That was one of my favourite, most beautiful experiences. It was just such a gift for all of us watching here and at home. So thank you from the bottom of my heart, every single one of you.”

Shane said he wished his family were there to witness the audition, but was ultimately left speechless by performance. He wiped away more tears as all four judges voted the choir through to the next round of the competition.

What did you think of the performance? Are you a fan of Australia’s Got Talent?