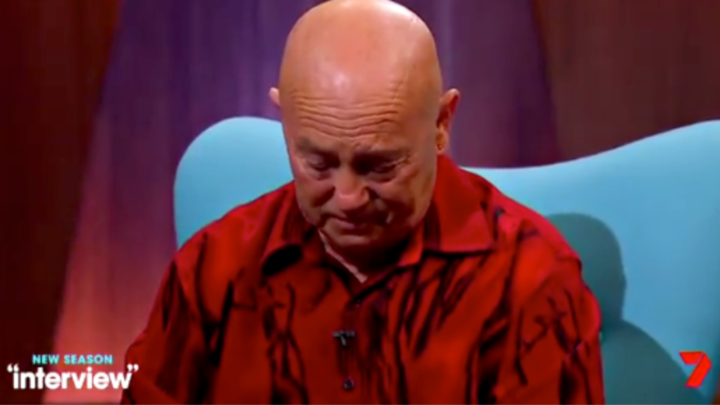 The Rose Tattoo frontman broke down in tears as he spoke out the death of his son Liam Anderson last November. Source: Getty.

Angry Anderson has given his most emotional interview yet, speaking openly with presenter Andrew Denton about the loss of his 26-year-old son Liam Anderson, who was allegedly beaten to death on Sydney’s northern beaches in November last year.

While the Rose Tattoo frontman has refrained from speaking publicly about the death of his youngest son in the months since, Anderson has now sat down for a frank chat with journalist Denton for his Channel Seven show Interview.

Appearing alongside his daughter Roxanne in a preview of the episode, which is set to air on Tuesday night, the 71-year-old rocker tells Denton he raised his kids to have “kindness”.

“The last thing he did was be kind,” Denton says. “Do you take some comfort from that?”

To which a teary Anderson replies: “I’ve tried, I’ve tried.”

In his first interview of the year Andrew Denton sits down with Angry Anderson and daughter Roxy for a powerful discussion on loss, family and finding the path towards joy.
–
An unmissable #InterviewAU Tuesday 9.00pm on @Channel7. pic.twitter.com/l1y6riQ7YS

Liam Anderson was found unconscious in Pavilion Park in the north Sydney suburb of Queenscliff on November 4 2018, and his friend Matthew Flame, 20, was later arrested and charged with murder in relation to the incident.

It is thought the friends had been partying in the city prior to Anderson’s death, with reports claiming that Flame had ingested drugs and alcohol before leaving the party. It has been claimed in court documents that Anderson had followed Flame out of the party, which is when the attack is said to have occurred, reports the Daily Mail. Flame remains in custody.

Read more: Angry Anderson: I take great comfort in the thought nothing in life is wasted

Last month, Anderson spoke exclusively to Starts at 60, touching upon the memories he has of the early days with the band and the effect that the deaths of his former bandmates – particularly that of close friend and guitarist Peter Wells in 2006 – have had on him.

The father-of-four said: “There’s a couple of times, especially with a track from the album Blood Brothers called ‘Once In A Lifetime’, which was written specifically about two real people and a real incident that happened. I’ve not written a song [like that], apart from ‘Scars For Life’ which is autobiographical, but I wrote ‘Once In A Lifetime’ for Peter – as a tribute to Peter.”

Anderson explained that he wrote the lyrics about “the spirituality aspect of Rose Tattoo as a band”, however they were inspired in particular by his final conversations with Peter before he passed away.

“When Pete was dying for weeks, months, he really got in touch with his spirituality,” the rocker explained. “He’s always been a very spiritual bloke anyway, which a lot of people didn’t know, but we really talked a lot about the afterlife, how we felt about it, what I believed it was, what he believed it was, and we talked a bit about spirituality.

“That inspired that song. While it’s difficult some nights to play, it’s also a joyous occasion. It’s about the acceptance of the inevitability. At some stage we’re all going to pass from this realm to the next, so I tried to capture that in the lyrics.”

He added: “Some nights it’s difficult to do it because it brings back all those memories but the great thing about the life experience, in a spiritual sense, is that nothing is wasted, everything is gathered, everything is worthwhile, everything is something. I take great comfort in that.”

The new series of Andrew Denton’s Interview will premiere on Channel Seven at 9pm on Tuesday, April 23.

Do you have a message of condolence for Angry Anderson? How have you come to terms with grief and loss in your life?