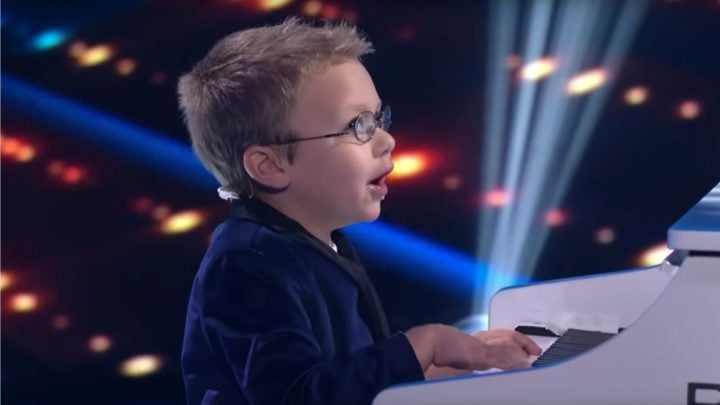 The seven-year-old, who is also visually impaired, impressed audiences with an incredible performance of Queen's classic song. Source: YouTube.com/AmericanIdol

It’s been decades since Freddie Mercury tragically passed away and while no one will ever replace the Queen superstar, an adorable seven-year-old comes close.

Avett Maness appeared on the latest episode of American Idol for the reality show’s Queen Week and wowed audiences and judges Lionel Richie, Katy Perry and Luke Bryan with an incredible rendition of one of Queen’s biggest songs. He wasn’t a contestant on the show, but rather a special guest performer.

Described by American Idol as a “piano prodigy”, Avett sat behind a mini piano on stage and belted out his own unique version of ‘Bohemian Rhapsody’. The judges smiled with delight at the tiny musician began singing the iconic track and showed off his impressive piano skills.

The crowd also went wild, waving their arms and cheering on the young singer.

What’s more amazing is Avett is visually impaired and has managed to gain a cult following by uploading his music videos to the internet.

Following the performance, host Ryan Seacrest asked his young guest how he managed to play the piano so well at such a young age.

“I am a viral sensation,” Avett cheekily told the host. “When I was 11 months old and when I was about two years old, I taught myself how to play the piano.”

Impressed, Ryan told Avett he was great at it.

“I know,” he replied, causing the audience to burst into fits of laughter.

Little Avett was also impressed by his own outfit and called his jacket a “Freddie Mercury jacket”.

Viewers at home couldn’t get enough of the young star.

“His cuteness factor is off the charts,” one fan on YouTube wrote. “Freddie Mercury is somewhere absolutely loving this. Great job young man.”

Another viewer wrote: “This kid is so inspirational. He’s seven, visually impaired and plays piano better than I ever will.”

A third added: “I love this little guy and his confidence!!! He’s so incredible.”

His family took to Avett’s Facebook page earlier in the week to share his excitement ahead of his American Idol performance. In one photo, Avett was spotted backstage in his very own dressing room.

He also walked the red carpet ahead of his performance, with his family thanking the American Idol crew for giving Avett a chance.

To date, Avett’s videos have been viewed more than 6.7 million times on YouTube.

What did you think of the performance? Are you a fan of American Idol?