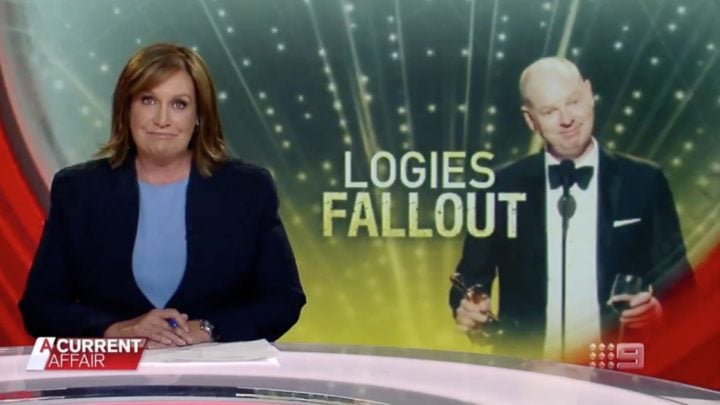 The 59-year-old presenter vented her anger at the comedian after he took home the top gong on Sunday night, before launching into a controversial and very lengthy acceptance speech.

Grimshaw accused Gleeson of coming across “smug” and refusing to wrap up the speech with grace – instead rambling on for an incredible eight minutes.

“The newly minted Gold Logie winner advised us all last night to lighten up. How light did he want it?” she asked on the show.

“Julia Morris was wearing Costa’s beard, Pete Helliar was wearing a Logie. We were celebrating achievement in an industry whose main purpose is to entertain, and also happens to employ thousands of Australians – an industry the Gold Logie winner smugly told us last night was ”dying’.”

She then added in a sarcastic tone: “We all waited for him to change pace and close his speech with some grace, but no chance… Hilarious.”

Her rare outburst got a mixed reaction online however, with many defending Gleeson. One commented: “Everything he said was heart felt and with a touch of comedy. He’s a comedian. I think he was right lighten up.”

While someone else added: “Maybe if you guys actually start ‘entertaining’ you might start winning awards.”

However, Grimshaw is far from alone and everyone from Karl Stefanovic to Kerri-Anne Kennerley have blasted Gleeson since.

Kennerley branded the comedian a “wimp” after he pulled out of an interview with Studio 10 at the last minute on Monday.

It comes after Gleeson took a swipe at former Today show host Stefanovic. Taking to the stage to address the room packed of television stars, he began: “I think the reason they (the Logies) ask you to do the opening is because Channel Nine has run out of stars.

What did you think of Tom Gleeson’s speech? Do you agree with Tracy or not?