Still got it! Rod Stewart’s powerful performance as he reunites with Jeff Beck 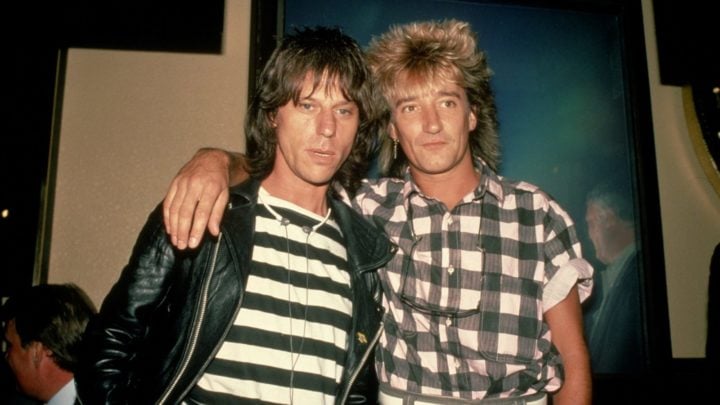 Rod Stewart has now reunited with Jeff Beck on stage - more than 30 years after this photo in the '80s. Source: Getty.

They performed together alongside Ronnie Wood in The Jeff Beck Group in the 1960s and while several decades have passed since, Rod Stewart and his former bandmate Jeff Beck have proved they’ve well and truly still got it as they surprised the world with a flawless performance.

Rod completely stole the show at the Hollywood Bowl, delivering incredible vocals for some of his most well known hits – just weeks after revealing his secret battle with cancer. And his energetic performance proved he’s as happy and healthy as ever now.

However, it was his impromptu reunion with Jeff halfway through that’s made headlines, as the pair delivered their first official performance together in around 10 years. While Rod had already performed everything from ‘Tonight’s The Night’ to his band’s rendition of Fleetwood Mac’s ‘Go Your Own Way’, he then recreated his hits with Jeff including ‘Blues Deluxe’, ‘I Ain’t Superstitious’, ‘People Get Ready’, ‘Rock My Plimsoul’ and ‘Morning Dew’.

While the pair first joined forces in 1967, alongside Ronnie Wood and Cozy Powell, they performed their first show in the US a year later. It triggered fame for the foursome, with them going on to produce two albums together. Rod and bassist Ronnie later left and joined with the three remaining Small Faces to become the Faces.

They didn’t cut ties with Jeff however, and Rod went on to collaborate with him on his 1984 single ‘Infatuation’. As a mark of their friendship, Jeff was later chosen to induct Rod into the Rock and Roll Hall of Fame in 1994, although he was unable to attend at the time due to the Northridge Earthquake. They last reunited in 2009 at Jeff’s concert in Los Angeles.

Meanwhile, Rod appeared on top form just weeks after opening up on his secret cancer fight. The famous singer discussed his struggles during a recent concert in the UK, explaining he was diagnosed in February 2016 and is thankfully now in the clear, The Mirror reports.

The revelation came during a fundraising event with former bandmates Kenney Jones and Ronnie Wood, with the 74-year-old bravely telling the crowd of hundreds how he managed to get through the hardships in secret and urging men to get their prostates checked regularly to stop the cancer in its tracks. Rod even used the situation to have a bit of a joke, claiming he warned his wife Penny Lancaster he was going to use the opportunity on stage to “come out”. Adding: “No, it’s not what you think. Two years ago I was diagnosed with prostate cancer.”

He went on to explain that he had remained quiet about the cancer with only those closest to him knowing the truth behind his health. But the star admitted it was time to let the world know, now that he was on the mend after being told he was in remission back in July.

“No one knows this, but I thought this was about the time I told everybody,” he said, according to The Mirror. “I’m in the clear now, simply because I caught it early. I have so many tests.”

Rod then took the moment to urge men to get checked, claiming the earlier you catch it, the better shot you have at beating the cancer and going on to live a long and happy life. He even reportedly had the crowd in fits of laughter when he explained: “Finger up the bum, no harm done.” Adding: “If you’re positive, and you work through it and you keep a smile on your face … I’ve worked for two years and I’ve just been happy, and the good Lord looked after me.”

Do you remember Rod Stewart and Jeff Beck performing together? Which is your favourite song by Rod Stewart?