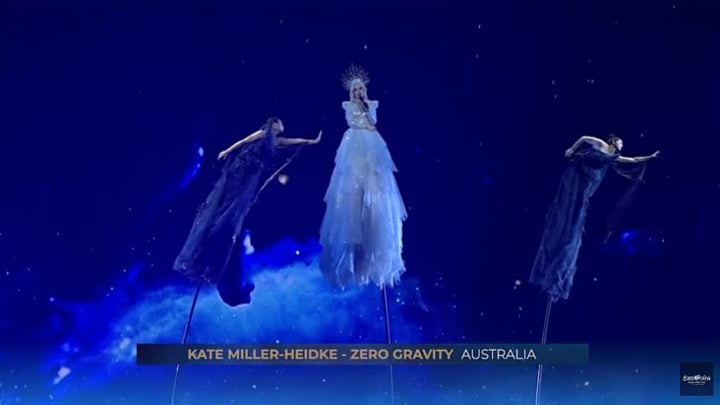 Aussie singer Kate Miller-Heidke has set a high standard for the Eurovision song contest wowing crowds with an “out of this world” rehearsal performance of her song Zero Gravity.

The 37-year-old left many in absolute awe as she appeared to float above the stage in Israel at the weekend for the semi-final dress rehearsal.

Looking every bit the star, Kate made a dramatic entrance in a stunning light blue frock which, according to The Daily Telegraph, took over 100 hours to create.

Her gorgeous voice reached impressive highs during the act in Tel Aviv which was performed in front of a giant video wall of the earth, space and stars.

Speaking about the performance shortly after stepping down from the stage Kate said she “felt really good about it” explaining everything came together well.

“The Australia: Decides performance worked on a lot of levels but there was a lot going on; it was quite full-on to watch and what we all really wanted to do this time was streamline everything so the song could take centre stage because there’s (also) a fair bit going on in the song,” she told ESCDaily.

“I get to move now, which is great. It took a little bit of getting used to but it’s actually surprising good I think because you are forced to not lock too much.

“(But) I don’t want to end up bending backwards; that would be terrible.”

Her amazing performance has gained much attention from fans who were quick to compliment the talented singer on her beautiful voice.

Taking to social media to express their thoughts one person wrote: “Beautiful.. looks like so theatrical and looked like a Disney movie.”

“I guess you can say her performance was… OUT OF THIS WORLD,” another added.

While a third said: “Wow! Truly spectacular. I love this.”

Back in February Kate was chosen to represent Australia in the contest after taking to the stage with an emotional performance. Fans were given the chance to vote for their favourite song and artist – with Kate beating nine other musical acts in what host Joel Creasey described as “a historic moment”.

Kate gave a dramatic performance as she showcased her pop hit ‘Zero Gravity’ – a song she recently revealed was inspired by her past personal struggle with depression – while wearing a huge lit-up tiered dress and giant crown-like tiara.

She told SBS shortly after: “I’m totally overwhelmed! This has been a peak experience already, and I’m dying with excitement at what’s to come.

“Thanks to everyone who voted, and to all the other artists who provided such a brilliant, eclectic and stiff competition. I’ve had a ball, and I’m so grateful and thrilled that I get to represent Australia at Eurovision.”

Are you a fan of the Eurovision Song Contest? What do you think of Kate Miller-Heidke’s latest performance?