What feud? Paul McCartney reveals John Lennon visits him in his dreams 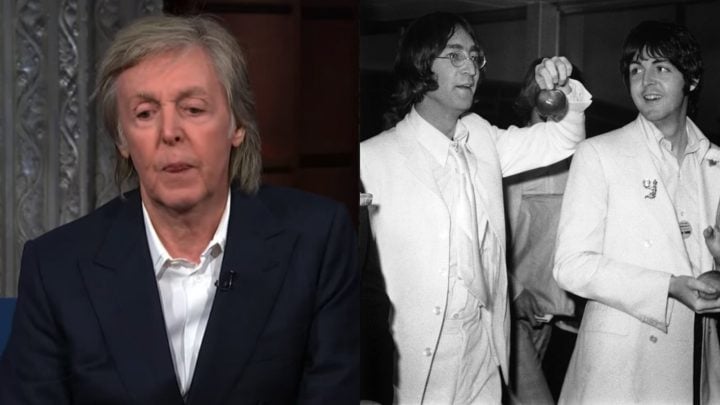 Paul McCartney has opened up on his close bond with John Lennon. Source: Getty (left) and YouTube/Late Late Show with Stephen Colbert (right).

They’ve been hit with rumours of a feud for decades, but Beatles legend Paul McCartney has now finally rejected them once and for all and revealed his incredibly close bond with late bandmate John Lennon has continued long after his tragic death.

Lennon was murdered in December 1980 at the age of 40, a decade after the band split up. And now, speaking in a rare and emotional interview on The Late Show with Stephen Colbert, McCartney, 77, has revealed he still sees his friend in his dreams.

“I dream about him. The thing is, when you’ve had a relationship like that for so long, such a deep relationship, I love when people revisit you in your dreams,” he told the host. “I often have band dreams and they’re crazy. I’m often with John, just talking about doing something … I have a lot of dreams about John. They’re always good.”

And McCartney completely dispelled rumours that the pair had feuded before the band split up, becoming emotional on camera as Colbert showed him a photo taken in 1968 by his late wife Linda of the pair of them together.

“That’s a very special picture for me actually because when the Beatles broke up a lot of the talk was like I was the villain and that John and I didn’t really get on well. It was a lot of down talk because everyone was sad that the Beatles had broken up,” he revealed, later adding: “The rumour started going around that John and I didn’t get on well, we were arch-rivals, that it was very heavy and ugly. The strange thing is you sometimes get to believe something, if it’s said enough times. So I used to think: ‘Yeah, it’s a pity, you know, we didn’t get on that well’.”

McCartney admitted while he always knew the truth, seeing the constant rumours about them in the media often got to him – and he even “bought into” the idea that he may be the villain after all. However, he said seeing photos like that would help him remember the good times. He added: “It’s like, this is how we were: this is why we related, or else we couldn’t have collaborated for all that time. Just seeing the joy between us here really helped me, because it reminds me that the idea we weren’t friends is rubbish. We were lifelong friends, our relationship was super-special.”

Meanwhile, McCartney and Ringo Starr recently joined forces to deliver some new music, with the pair announcing they have reunited in the studio to record a cover of a track written by their late former band mate Lennon shortly before he died. The pair have recorded a version of ‘Grow Old With Me’, which was written by Lennon for inclusion on his final album Double Fantasy shortly before he was shot dead.

Starr released a statement confirming the exciting news, in which he revealed it was record producer Jack Douglas who inspired his decision to record the song. He said: “Jack asked if I ever heard The Bermuda Tapes, John’s demos from that time. And I had never heard all this.

“The idea that John was talking about me in that time before he died, well, I’m an emotional person. And I just loved this song. I sang it the best that I could.”

Ringo added: “I do well up when I think of John this deeply. And I’ve done my best. We’ve done our best. The other good thing is that I really wanted Paul to play on it, and he said yes. Paul came over and he played bass and sings a little bit on this with me.

“So John’s on it in a way. I’m on it and Paul’s on it. It’s not a publicity stunt. This is just what I wanted. And the strings that Jack arranged for this track, if you really listen, they do one line from ‘Here Comes The Sun’. So in a way, it’s the four of us.”

What are your memories of the Beatles breaking up?