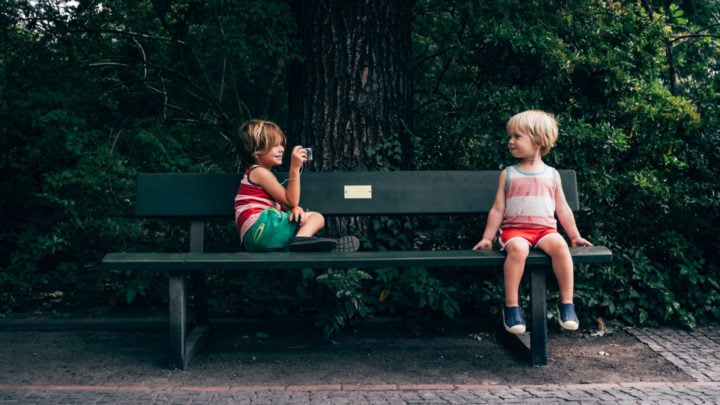 The two boys began to chat to one another. Source: Getty.

While two families were waiting in line to see a tourist attraction, their two five-year-old boys were getting acquainted.

“My name is Joshua. What’s yours?” asked the first boy.

“My daddy is a doctor. What does your daddy do for a living?” asked Joshua.

Adam proudly replied: “My daddy is a lawyer.”

Daily Joke: You are in a car driving at a constant speed

You are driving in a car at a constant speed. On your left side is a valley and on your right side is a fire engine traveling at the same speed as you.

In front of you is a galloping pig which is the same size as your car and you cannot overtake it. Behind you is a helicopter flying at ground level.

Both the giant pig and the helicopter are also traveling at the same speed as you.

What must you do to safely get out of this highly dangerous situation?

Don’t ride the kiddie merry-go round when you are drunk, so get off.

Daily Joke: A turtle was climbing a tree

Deep within a forest a little turtle began to climb a tree. After hours of effort he reached the top, jumped into the air waving his front legs and crashed to the ground. After recovering, he slowly climbed the tree again, jumped, and fell to the ground.

The turtle tried again and again while a couple of birds sitting on a branch watched his sad efforts. Finally, the female bird turned to her mate.