Daily Joke: Four nuns left the convent for the weekend 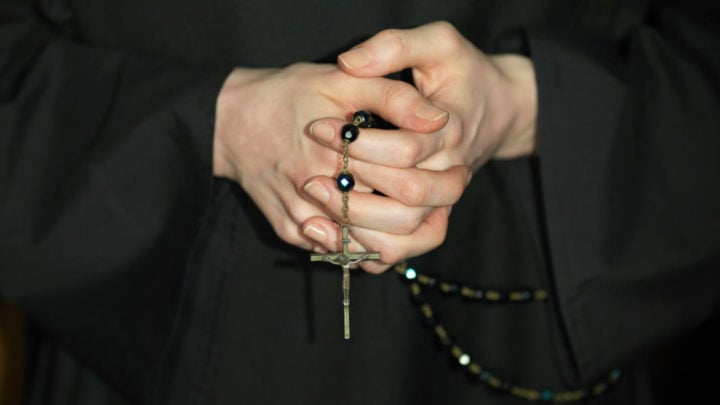 The nuns confessed their sins to the priest. Source: Getty.

It was Friday and four nuns went to the priest at the local Catholic church to ask for the weekend off. They argued back and forth for a few minutes.

Finally the priest agreed to let them leave the convent for the weekend. “However,” he said. “As soon as you get back Monday morning I want you to confess to me what you did over the weekend.” The four nuns agreed and ran off.

Monday came and the four nuns returned. The first nun went to the priest and said: “Forgive me Father, for I have sinned.”

The priest asked: “What did you do, Sister?” She replied: “I watched an R-rated movie.”

The priest looked up at heaven for a few seconds, then replied: “You are forgiven. Go and drink the holy water.”

The first nun left, and the fourth nun began to chuckle quietly under her breath.

The second nun then went up to the priest and said: “Forgive me Father, for I have sinned.”

The priest replied: “Okay, what happened?”

She said: “I was driving my brother’s car down the street in front of his house and I crashed into my neighbours fence and didn’t tell them it was me.”

The priest looked up to heaven for half a minute, then said: “You are forgiven. Go and drink the holy water.”

The second nun left. By this time, the fourth nun was laughing quite audibly.

Then the third nun walked to the priest and said: “Forgive me Father, for I have sinned.”

The priest asked: “Out with it. What did you do?”

“Last night, I ran naked up and down Main Street.”

The priest looked up at heaven for a full five minutes before responding: “God forgives you. Go and drink the holy water.” She left. The fourth nun fell on the floor, laughing so hard that tears ran down her cheeks.

The priest asked: “Okay. What did you do that was so bloody funny?”

The fourth nun replied: “I peed in the holy water.”

Daily Joke: A blonde was at the petrol station

A blonde stopped at a petrol station, got out of the car, opened the bonnet, and checked the engine oil. After a few seconds, she took the dipstick in her hand and walked over to the attendant.

“Excuse me,” she said. “But can I buy a longer dipstick?”

“Because this one isn’t long enough to reach the oil.”

Daily Joke: A father took his young son to the opera for the first time

A father took his young son to the opera for the first time. The conductor started waving the baton, and the soprano began her aria.

The boy watched everything intently and finally asked: “Why is he hitting her with his stick?”

“He’s not hitting her,” answered the father with a chuckle.