Daily Joke: A young woman takes her new partner to meet her parents 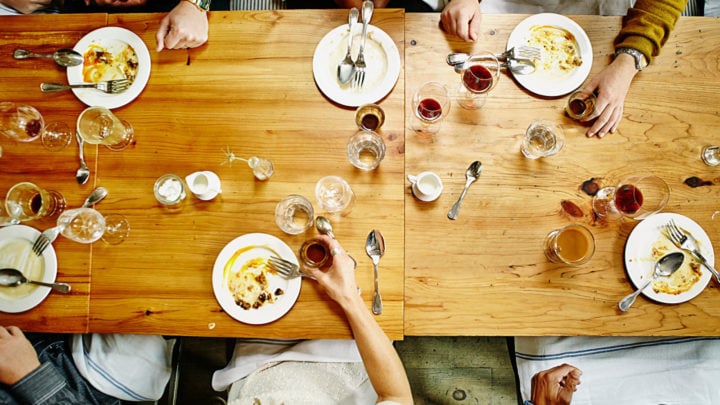 The parents set out dinner for the new couple. Source: Getty.

A young woman visits her parents and brings her new partner to meet them. After an elaborate dinner, the mother tells her husband to find out about the young man.

The father invites the man to his library for a drink and asks him: “So what are your plans?”

The father answers: “A Torah scholar? Admirable, but what will you do to provide a nice house for my daughter to live in, as she is accustomed to?”

“I will study,” the young man says. “And God will provide for us.”

“And how will you buy her a beautiful engagement ring, such as she deserves?” asks the father.

“I will concentrate on my studies,” the young man replies. “God will provide for us.”

“And children?” asks the father. “How will you support children?”

The conversation continues like this, and each time the father questions, the young idealist insist that God will provide. Later, the mother asks: “How did it go, honey?”

The father answers: “He has no job and no plans, but the good news is he thinks I’m God”.

A grandmother bragged about her grandsons

An elderly, wealthy woman was boring fellow beachgoers as she bragged on and on about her two remarkable grandchildren.

Unable to stand it any longer, a fellow sunbather interrupted her.

“Tell me, how old are your grandsons?”

The grandmother gave a grateful smile and replied: “The doctor is four and the lawyer is six”.

John goes to the deli for his daily soup

John goes to the deli for some soup. After he’s seated and about to eat he calls the waiter over.

When the waiter comes he says: “Taste this soup”.

The waiter says: “Why what’s wrong with the soup?”

The waiter says: “John, you’ve come in here for thirty years and you always get the soup, you’ve never complained before”.

The waiter says: “What? What is it? If you don’t want the chicken soup we have other kinds – vegetable, Italian Minestrone?”

He leans over the table prepared to taste the soup, he hesitates and says: “Where’s your spoon?”