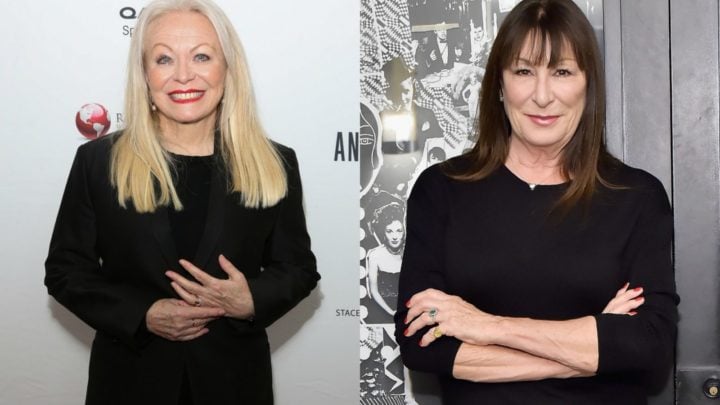 Australian favourite Jacki Weaver has hit back at a smart remark Anjelica Huston made about her new movie.

This week, The Addams Family actress took a slight dig at Weaver when she was asked why she agreed to co-star in John Wick 3.

In the interview with Vulture, Huston said that these days she’s only interested in films “that aren’t apologetically humble or humiliating like, ‘Band of cheerleaders gets back together for one last hurrah,’ you know”, offering the rough plot of Poms — the new film Weaver stars in — as an example.

However, speaking to Vanity Fair following the Los Angeles premiere of Poms, Weaver told the publication what she thought about Huston’s comments.

“I just laughed,” the Australian actress said. “And then I said, ‘Well, she can go f— herself.’ I was kind of disappointed. I had always been an admirer of Anjelica. And I thought, ‘That’s a bit mean and petty.'”

She added: “Didn’t she grow up in a castle in Ireland? I can’t see her cheerleading. But then, I grew up in Australia, where there is just no cheerleading culture. I think the most interesting acting happens outside your comfort zone.”

Meanwhile, it comes after the beloved actress suffered a terrifying health scare after what was supposed to be a routine check-up last January, according to Sunday Life magazine.

Read more: ‘It was as big as a mango’: Jacki Weaver opens up about horrifying tumour

After routine X-rays to check on minor heart palpitations, the 71-year-old was rushed to hospital for emergency surgery after a tumour was found on her adrenal gland.

Weaver told the publication: “It turned out I had a rare tumour called a pheochromocytoma. When they discovered the tumour, it was already as big as a mango and I was told they’re usually as big as a 25-cent piece, so that was scary.

“There are only a few thousand of them a year in America and a few hundred a year in Australia, so I’m a bit conceited about my tumour being so rare.”

But Weaver isn’t slowing down anytime soon. Her latest project, Poms, is an uplifting comedy about Martha (played by Diane Keaton), a woman who moves into a retirement community and starts a cheerleading squad with her fellow residents, Sheryl (Jacki Weaver), Olive (Pam Grier) and Alice (Rhea Perlman).

The former wife of Derryn Hinch, who featured in early shows like Alvin Purple in 1973 and Picnic at Hanging Rock in 1975, has had a long stage career, in plays like A Streetcar Names Desire and Death of a Salesman.

After getting an Academy Award nomination for her role in Animal Kingdom in 2010 she’s gone on to bigger and better things, including another Oscars nomination for Silver Linings Playbook.

Are you a fan of Jacki Weaver?