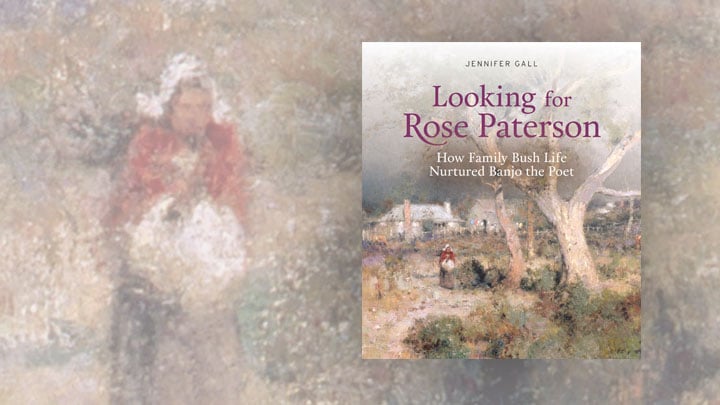 Looking for Rose Paterson is a beautifully produced book, published by the National Library of Australia Publishing, a tribute to Rose Patterson the mother of Australian poet Andrew Barton ‘Banjo’ Patterson.

It is not only a tribute to her, but all those pioneering women who endured the loneliness of bush life, bearing children and raising families in the most difficult of circumstances.

Rose Isabella Barton was born in 1844, a member of a wealthy pastoralist family with connections throughout the colonies of New South Wales, Queensland and Victoria. At 18, she married Andrew Bogle Patterson several years her senior and also a well-connected pastoralist. 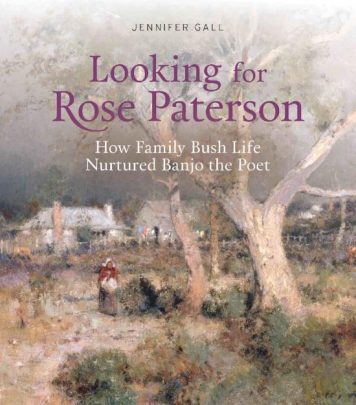 Their first son, Andrew Barton Patterson, was born in 1864 and was followed at fairly regular intervals by six siblings, all of whom lived to adulthood. The family holdings did not prosper and Andrew Bogle Patterson was forced to sell his holdings. Rose spent most of her married life at Illawong, near Binalong in NSW as the wife of the manager in a four room bark hut. When her husband died at the age of 56 Rose moved to ‘Rockend’ to live with her mother in Gladesville, Sydney. She died there four years later aged just 49.

Jennifer Gall, the author of this book, has developed a fascinating account of Rose’s life from these bare facts. The National Library holds a selection of letters from Rose to her younger sister Nora. Fortunately, they were found by Professor Colon Roderick and gifted to the Library. This is a fascinating story in itself. These

This is a fascinating story in itself. These lively letters form the basis of the book. They have been transcribed and reproduced in facsimile so we can see Rose’s strong handwriting and the careful way letters were written and then cross written to conserve paper.

Jennifer Gall has researched the background to the Patterson family, drawn a family tree, found photographs of the family and photographs of the time. There are maps and paintings. Throughout the book there are quotes of A.B Patterson’s poems presented on a backdrop of famous paintings by Tom Roberts, Arthur Streeton and Walter Withers.

This all makes for an extremely attractive book.

I was just as fascinated by the content, having long been an advocate of the role, often unsung, of women in our past.

The book is arranged in chapters with appropriate quotes from Rose’s letters as headings. The topics covered include life on Illalong Station, childbirth and child rearing ‘Smuggle a Bottle of Chloroform’ and ‘Judicious Neglect and Occasional Scrubbing’, the education of women and women’s rights, social life in the second half of the nineteenth century, and a chapter on Barty’s growing up. Andrew Barton Patterson was always called Barty by the family.

Rose’s life was very tough one. She had seventeen years of childbearing in an isolated area, though she did go to Sydney for the birth of one child. The house the family lived in was badly maintained by the owners of Illalong. The boys rode four miles on a pony to school at Binaway. The girls were taught to read and play the piano and were then expected to teach the younger girls. All the family had onerous, constant farm chores. Rose was also responsible for all mending and making of new garments. Her husband was often absent seeing to farm business at the far reaches of the property.

Rose was also responsible for all mending and making of new garments. Her husband was often absent seeing to farm business at the far reaches of the property. Rose’s letters to her sister are bright and cheerful, always putting an optimistic face and giving a humerous  slant to mishaps and activities.

The sisters sometimes ‘swapped’ daughters as each found their daughters difficult to manage at times. The emphasis on raising the girls was to have them able to read, play the piano, sew, dance and engage in lively conversation. There was constant pressure on all of them –adults and children- to conform to the standards of polite society.

I had always had the impression ‘Banjo’ Patterson was from a privileged background, but his childhood was spent in poverty as his parents worked extremely hard on a rural property which they did not own. His childhood was marked by benevolent neglect as his mother was concerned with the younger children. He suffered throughout his life from the ill effects of a broken arm undiagnosed in childhood. Barty attended Sydney Grammar because of the benevolence of a maternal uncle and because he was able to live with his maternal grandmother. His mother’s early death meant he became the provider for his much younger sisters.

In this Women’s History Month, Looking for Rose Paterson by Jennifer Gall is a wonderful book to celebrate the role of mothers, wives, sisters and daughters of our pioneering days.

This wonderful book – along with other titles from the National Library of Australia – is available now from Dymocks. Click here to learn more.